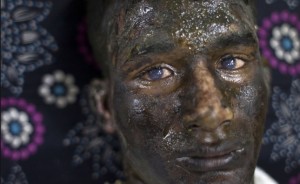 There are so many compelling arguments against terrorism as a political method for the forces of social transformation. Everyone has the right to defend themselves against considerable & increasing state violence so there are going to be more hefty scuffles to gain & retain our rights to speak, organize, & assemble the forces of change.

But terrorism is something different than self-defense because it takes out the innocent, the bystander, children. Historically, terrorism is often used by the demoralized, by those who are isolated or defeated by relentless tyranny. It often attracts disturbed elements in the political movement along with police agents. In some places, vandalism has become a part of protest, an anarchic grandstanding thing where breaking bank windows is seen as shattering the seats of power. It’s greasy kid stuff trying to substitute showboating for the less glamorous work of movement building.

This very traumatized Bangladeshi man is the most powerful argument against terrorism. He’s one of the bystanders in a political dispute where reckless & foolish activists on one side reportedly resorted to petrol bomb attacks on buses, trucks, & cars. In the incident where this man was burned, officials said the bus was full of sleeping passengers when it was attacked. Seven people were burnt alive & 25 were injured.

Those who are serious about social change don’t adopt the methods of psychos & serial killers. Making the world suitable for human beings to live & love in is a historic mission, not greasy kid stuff or barbarism.