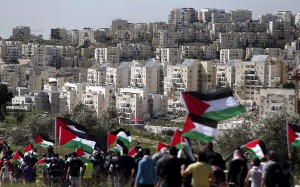 The caption to this photo in the LA Times read: “Protestors carry Palestinian flags during a demonstration against Israeli encroachment on a hill in the West Bank village of Bilin in front of the Israeli settlement of Modiin Illit.” Just enough information so you don’t have a clue what’s going on or why Palestinians are protesting a little “encroachment on a hill.”

About a decade ago, Israel constructed the apartheid barrier wall that cuts off the village of Bilin from most of its olive groves, pastureland, & other agricultural land. This is the subject of the documentary “Five Broken Cameras” that was nominated for an Academy Award. The route of the apartheid wall appears on the surface to be a Rube Goldberg machine because it encircles some Palestinian towns, cuts off villages from their farmlands, puts acres of the West Bank on the Israeli side of the wall. But in fact it has been repeatedly challenged in court because it is a carefully thought out device to expropriate land as well as isolate & control Palestinians.

According to provisions in the Geneva Conventions, Israeli settlements on occupied territory are illegal. Israel denies this of course & Zionist publications & groups defend them by claiming Jews have lived on these lands for thousands of years & they give the settlements Biblical names to render their narrative less nonsensical. They falsify history for the same reasons they appropriate aspects of Palestinian culture & claim Muslim religious sites have previous Judaic traditions. (Those mosques they can’t lay claim to, they simply torch.) But there is no Biblical or historic Zionist claim to Palestine. It’s all invented.

There are somewhere between 400,000 & 500,000 Israeli settlers now living in the West Bank in these monstrous looking high-rises. The settlers, who are basically freeloaders, have come from all over the world to displace Palestinians. They’re moving into settlements & essentially building cities with no useful skills for doing so. There’s no working class & to build a city you need plumbers, electricians, carpenters. So along with setting up construction companies they have to invent a working class to do the work. That’s why the issue of US firms & manufactories subcontracting to the settlements is an issue for the BDS movement. The companies are intended to facilitate the economic stability of settlements.

Israel is sustaining an extreme housing crisis & for a colonial-settler state that is a central problem. You can’t recruit people from all over Kingdom Come to move to Israel if you can’t provide affordable housing even for long-time residents. So many of the settlers are in fact not from abroad but residents of Israeli cities looking for cheaper housing.

It’s now been a decade since residents of Bilin started weekly Friday protests against the apartheid wall & continued expropriation of their lands. Israel claims it built the wall to deter terrorist attacks. So why does it use its occupation army to attack the peaceful protesters of Bilin? In 2009, Israeli soldiers killed 30-year-old protestor Bassem Abu Rahmah with a high-velocity tear gas grenade. His death is also featured in “Five Broken Cameras.” In 2013, Israeli military investigators closed the sham inquiry claiming lack of evidence despite three separate video recordings.

Stand with the people of Biliin by building the economic & cultural boycott of Israel, including products from the settlements. Demand “No aid of any kind to Israeli apartheid & ethnic cleansing!”