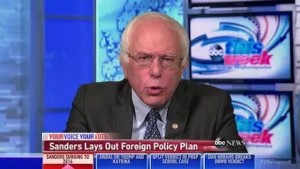 You live long enough, you see these left shills for the Democratic Party (DP) come & go & eventually exit the political stage to the right–just as they were meant to do in the shell game of a two-party electoral system. The list of shills is endless from Eugene McCarthy to Bernie Sanders. Their sole function is to rope in broad progressive forces uncomfortable that the DP is indistinguishable in practice from the Republicans–but not uncomfortable enough to reject the entire shell game.

None of these shills are prize packages because electoral history shows it doesn’t take much to rope in the credulous. But Sanders is surely among the least inspiring. Oh let’s not beat around the bush. His politics are absolutely awful. But what his campaign has done is expose the fault line in US politics, that profound chasm between provincials who care only about paychecks & interest rates in the US & those who refuse to privilege Americans over people anywhere else on this planet.

It’s an iron law of politics that the first sign of a socialist going sour is they turn their backs on other peoples as of no consequence in comparison to US economic advantages. And in the long run, because those so-called progressives can’t think beyond their W-2 forms, the paychecks shrink & the wars grow more ubiquitous. There is a direct political nexus between militarism, racism, poverty, & the declining standard of living for US workers.

Bernie Sanders’ support for Israeli apartheid, his contemptuous dismissal of the war on the Black community, his xenophobic opposition to immigration rights that puts him right along side Donald Trump & all the other bozos, should have made clear he’s an establishment man, a supporter of war, colonialism, & social hatred. And that should be that for progressives. But even all that hasn’t broken the spell of provincialism & nationalism.

Now he came out publicly on TV & supported the ‘selective & effective’ use of drone bombing. He said “When you kill innocent people, what the end result is that people in the region become anti-American who otherwise would not have been.” Well isn’t that a mouthful of self-incrimination! A man whose concern is not that tens of thousands of people are being bombed to smithereens but that they might cop an attitude toward the Pentagon if they survive! That statement alone should shatter every single last illusion that Bernie Sanders has anything to offer people in the US.

It’s time we end the reign of expedience & demand politics rooted in political principles. The most fundamental principle of all is solidarity with people all over this planet as brothers & sisters. The US border does not define the limits of humanity “An injury to one is an injury to all.” If Sanders can’t deliver on that he’s just another worthless bum.