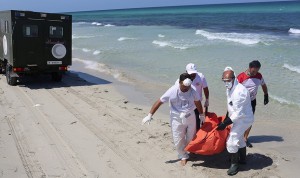 Twenty-six European navies with the most high-tech surveillance equipment in the world prowling the Mediterranean Sea hunting down “human traffickers.” We know all about that Black Hawk Down stuff; we watched the video of Osama bin Laden being taken out by Army Rangers; the world witnessed US-NATO taking out the infrastructure of an entire country when it invaded Libya in 2011. And still hundreds of African refugees are drowning? So many that the number is unknown?

There aren‘t many reports of rescue efforts but the few there are portray gruesome scenes of body bags being lined up one after another & countless bodies being washed ashore. It may be time to intone “Black Lives Matter” on the Libyan coast. It is definitely time to take an active stand for the human right of immigration & sanctuary.

This is a rescue operation off the coast of Libya (last Friday) where two boats with up to 500 refugees sank. The death toll is now over 200.

Open the damn borders! Stop the mass murder of refugees!