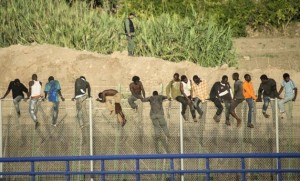 Undocumented immigration from the four corners of this planet is one of the greatest crises of this generation exposing the wretched underbelly of neoliberal capitalism, the barbaric phase of capitalism. Who can count that high, but there are an estimated 200 million immigrants traveling enormous distances & treacherous routes to find rest & work in the plundering countries.

On the southern US border with Mexico, there is a massive influx of unaccompanied children from Central America, estimated at nearly 60,000 children just in the past ten months. The phenomenon of unaccompanied immigrant children exists on every single of the well-traveled routes: from Zimbabwe, children cross a crocodile-infested river into South Africa; from Afghanistan, they travel in engine compartments of cars to sneak past immigration controls; young people from all over Africa attempt to scale barb wire fences, beaten by Moroccan cops on one side & Spanish cops on the other, to enter the north African enclave of Melilla where they can try to claim refuge in European territory. Israel appears to be the only country African immigrants are trying to escape from because the racist violence is so severe. Some of the immigrants are from places like South Sudan & Congo where Israel has massive investments for plunder.

There’s more rubbish written about these immigrants than a sane mind can grasp. There’s that Indian parable about the blind man trying to determine what an elephant looks like by feeling different parts of the elephant’s body. Most anti-immigration polemicists apparently never make it past the elephant’s ass. US politicians claim the children are associated with drugs & prostitution; some say they’re fleeing from gang violence in their own countries; some claim they’re part of organized crime cartels (when in fact most are too young for US government employment); & there are always the schnooks who claim they’re coming here for welfare benefits like food stamps even though largesse is not a quality of social services in the US. If you’re lucky, you get fifty cents a day for food stamps.

The conduct & policies of European Union border patrols in the Mediterranean region are as criminal as it gets, making the sea a graveyard for thousands of immigrants, with politicians incapable of the higher human emotions trying to cover their crimes with ceremonial crocodile tears. Officials from the Obama regime put on a sad face talking about the humanitarian crisis here & then propose legislation to fast-track deport the kids in violation of every standard of child welfare & sanctuary.

It’s quite observable that children are the primary victims of neoliberal plunder & military policy. Just as the children of Gaza are exposing Israel, the children of Central America & Africa are exposing the plundering countries. Child welfare recognizes no boundaries; human solidarity doesn’t either.

These young men are trying to cross into Spanish territory in north Africa at Melilla where there is a refugee center. We wish them solidarity & Godspeed on their journey.

Open the damn borders! No human being is illegal!