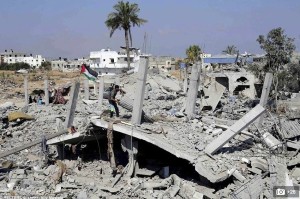 For the umpteenth time, media plays with truth in the caption to this photo of a bombed out home in Khan Younis, Gaza: “witnesses said was (it) destroyed in the Israeli offensive.” By hedging, Israel can make their “evil fairies from outer space did it” defense or claim it’s from a misfired Hamas rocket if it ever gets tried in an international tribunal for war crimes & crimes against humanity for Operation Ethnic Cleansing in Gaza.

The UN has started an investigation but it will certainly end as all the rest: letting Israel walk away scot-free from war crimes witnessed by the entire world. We can hold our own tribunals where evidence carries weight & hasbara is recognized as cartoon & called out for what it is: recycled 19th century racism & colonial hatred that views the colonized as sub-human.

Tons of cement have to be cleared with bulldozers & backhoes & it’s unlikely Israel, which controls & blockades Gaza, will allow delivery of that equipment by claiming Hamas will use it to build more tunnels. Meanwhile it’s extremely dangerous for people to be crawling around the shifting debris, but where else do thousands of homeless people go? UN refugee facilities were already inadquate when Israel bombed six of them. So people are now setting up camps & bedding in the midst of debris. You can see in the left background of this picture that someone has set up camp here. There’s no place to cook or bathe or even sit; no place for intimacy or privacy; for heaven’s sake, there’s no place to go the toilet. Prior to this onslaught the only local source of water (an aquifir) was 90% polluted. Gaza is barely habitable–which is exactly what Israel intended.

Still the most striking thing about this photo is the Palestinian flag in the midst of devastation. The Arabic word for “fortitude” must be “Palestinian” because intifada is not for the faint-hearted. Israel is still bombing in Gaza, having again broken it’s most recent ceasefire agreement. The sight of that flag symbolizing the spirit of resistance makes this man a target.

Apparently the original Hebrew name for Operation Protective Edge (the name Israel gave this phase of Operation Ethnic Cleansing) is “Tzuk Eitan” meaning “Mighty Cliff”. Isn’t that ironic because there is probably no more apt metaphor for the barbaric brinkmanship that has brought Israel to the edge of a mighty steep cliff–a cliff it is destined to go over.

Once again, Gaza looks like the apocalypse has been & gone. Support Palestinian justice & build the hell out of the economic boycott of all Israeli products (barcode beginning 729). Keep marching.