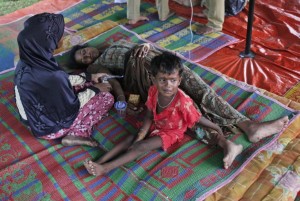 In a move of staggering barbarism, the European Union (EU) has approved plans for military operations to stop immigration from North Africa. It will begin next month with naval operations & likely proceed to “boots on the ground” in Libya–ostensibly to rout out “human traffickers” but of course to terrorize & deter immigrants. The military siege will almost certainly include the Spanish enclaves of Melilla & Ceuta on the North African coast near Morocco, another entry point for immigrants where Spanish authorities are increasing assaults to beat them back.

In that shell game we know so well for sanctioning war, the EU is lobbying the UN for approval. The UN is now trying to determine how to get their approval past international condemnation & contempt & salvage their tattered reputation from their operations in the DR Congo & Haiti.

The EU acknowledges there will be “collateral damage,” that men, women, & children on immigrant vessels will be killed. But who’s kidding who? They are not collateral at all but the intended victims. You don’t take a navy & an army after a few, or even several hundred “traffickers.”

The crisis in the Andaman Sea has been solved for the moment by Indonesia & Malaysia giving temporary refuge to the estimated 6,000 to 8,000 Rohingya & Bangladeshi refugees starving to death on ships. Thailand refused refuge & it’s certain immigrants would not be safe there anyway–so murderous is the military regime. Leaving people to starve to death was too unspeakable a crime, not for governments to perpetrate, but to perpetrate before public scrutiny & condemnation.

Photos show Indonesian fishing boats towing refugee ships to shore. There are images of refugees bathing, grooming, children playing, people tending to their sick, many looking shell-shocked. But for now, they are on dry land.

The crisis is by no means over for the Rohingya since persecution continues in Myanmar & many will continue to flee. Until they find a permanent refuge without persecution, we must remain on red alert. These governments are only waiting for attention to pass before they start with the barbarism again.

The crisis in the Mediterranean is now a war against immigrants. People of good will around the world must consider ways to put massive & emergency political pressure on our governments & the UN to back off their murderous plans. Not just Europeans but everyone must protest the use of military force against desperate, unarmed human beings in plastic dinghies.

Immigration is a human right! If the EU, Thailand, the US, Australia, & other countries cannot honor it, they have to be taken out. Neoliberalism, the barbaric phase of capitalism, has proven incompatible with human life.

Photo is Rohingya boy sitting with his sick mother in an Indonesian refugee camp.