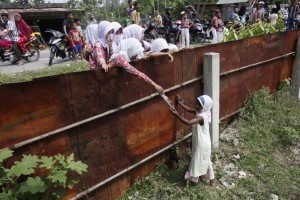 Hopefully, at some point media & human rights groups will exhaust their incredulity that Burmese Nobel Peace Prize winner Aung San Suu Kyi remains silent on the ethnic cleansing of Rohingya Muslims in Myanmar. In 2012, when she received the Nobel prize & the US Presidential Medal of Freedom (an honorific signifying political death) she refused to denounce the violent pogrom against Rohingya driving thousands into exile in Bangladesh. Bangladesh was refusing them entry & when reporters asked Suu Kyi about it, she told them she “didn’t know” if the Rohingya could be considered Burmese citizens. They had been stripped of citizenship in 1982 by the military junta & are treated as undocumented immigrants though Muslims go back centuries in Burma.

When asked, she has also insisted the pogroms against Rohingya, led by right-wing, nationalist Buddhist monks & fomented by the military regime (to facilitate land grabs), are religious, not political disputes & that violence is committed on both sides. That is not silence but outright collusion with the regime & with the pogroms—from a person who claims to be inspired by the non-violent vision of Gandhi & who was feted by the Nobel committee for her “visionary idealism” & abhorrence of brute force.

In the past few years, Suu Kyi has met with H. Clinton, Obama, & Christine Lagarde, the executor-in-chief of the IMF. They’re not meeting with her for social smooch-fests but because the US has immense capital investments in Myanmar. There is also an attempt to transition the economy from a form of crony capitalism controlled by the military to the scorched earth economics of neoliberalism. They want her to help promote that & are as indifferent to genocide of Muslims as she is. US companies were banned from investing in Burma in 1997 but under Obama economic sanctions were lifted & some of the biggest US corporations operate there now, including Coca Cola, PepsiCo., MasterCard, Visa, Cisco, Gap, Inc., & General Electric. During the years of sanctions, most investment, primarily based on the extractive industries, came from China & Thailand. There is now a competition shaping up in Myanmar between Chinese, Indian, & US business enterprises.

In 2013, farmers, villagers, & environmentalists began protests against the $1 billion Latpadaung copper mine project, a joint venture between a Chinese mining company & the Myanmar military. According to protesters, the project was based on massive land grabs (8,000 acres/3,200 hectares), destroying nearby mountains, polluting farmlands with waste products from the mines, destroying schools, homes, & monasteries, creating catastrophic environmental, social, & health problems. They demanded it be shut down. The regime (which Obama & Clinton tout as democratic) took after the protesters, including many Buddhist monks, with water cannons, tear gas, smoke grenades, & white phosphorous incendiary devices. Over 100 were hospitalized with serious burns.

Suu Kyi was appointed to head the official government commission set up to investigate the police violence as well as assess the social & economic sustainability of the copper mine. The regime likely figured that with her reputation as an opposition leader & all her honorifics she was the best person to make pigs fly. The commission ruled in favor of the mining project, pointedly avoided criticism of the government, & did not call for prosecuting those involved in the violence against protesters.

Suu Kyi went to meet with farmers, villagers, & protesters near the mining project to sell these conclusions & argued that Burma should honor the deals with foreign companies because “If we unilaterally break off ongoing projects, we stand to lose international trust.” Stooping to banalities (of the kind that likely go over well with Obama & Clinton), she added “I think we have to deprioritize our emotions & needs when it comes to the greater good.” The dispossessed protesters heckled her out of town. She’s lucky they didn’t ride her out on a rail.

Not just Suu Kyi’s silence on the pogroms against the Rohingya but Obama’s conduct of several wars exposes the Nobel Peace Prize as a fraud—as if that needed any more documentation after Henry Kissinger won it in 1973. It has no more cachet than People magazines “Sexiest Man Alive” award. And for rebels against tyranny, it once again shows that in social transformation there are no gurus, no masters but only teachers—even those of the less edifying kind.

This photo is young Muslim school girls in Bayeun, Aceh province, Indonesia, handing food over the wall to a Rohingya refugee girl. Unlike Suu Kyi, they recognize the humanity of Rohingya Muslims. Unlike her, they do the right thing even without honorifics. Unlike her, they are the very best of humanity.