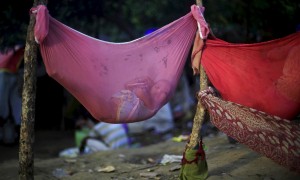 Media reports that after a year in office, Indian prime minister Narendra Modi has cut social welfare spending that will impact at least 300 million poor. The cut in funds for nutrition, clean water, & health programs (stingy to begin with) will instead go to infrastructure projects like roads & bridges to facilitate industry & foreign investment–the neoliberal model used all over the world. Except in the US where they cut social welfare & still do not invest in infrastructure so that bridges are collapsing all over the place.

Modi set up an agency called Niti Aayog (or National Institution for Transforming India Aayog) to execute the neoliberal transition–or rather to accelerate it since it’s been operative in Indian agriculture & mining for a long time. The agency is headed by Columbia professor Arvind Panagariya, a man trained at the World Bank, IMF, World Trade Organization, & a guru of neoliberal scorched earth economics. The agencies mandate is to dismantle the “Soviet-style Planning Commission” which didn’t appear to be working that well anyway for working people & go whole-hog neoliberal.

This child lives in a New Delhi slum & is likely to grow old there unless neoliberalism is decisively routed–which won’t be easy but is possible & necessary if humanity is to survive. Housing is not part of neoliberal infrastructure schemes.