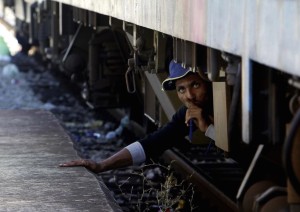 It looks like this refugee trying to travel under the train from Macedonia to Serbia is signaling the photojournalist not to give his position away to authorities. But ratting the guy out might be doing him a favor since riding the truss rods under a train moving at high speed, rocking & swaying on rough track, & throwing up rock ballast from the tracks is extremely dangerous. As desperate as he is, he may not reach his destination–either alive or in one piece.

Central American immigrants travel a thousand miles through Mexico to the US border on trains they call “la bestia” (the beast) or the “el tren de la muerte” (the death train). The freight trains don’t stop for immigrants who are forced to hop on & off moving trains. Hundreds have sustained permanent injuries, including amputation of limbs, & must return to countries without social security nets. If they weren’t desperately poor, they wouldn’t have risked the trains in the first place. Their recklessness is borne of absolute necessity. Thousands of immigrants also face paramilitary & gang violence, including robbery, assault, rape, torture, kidnapping, extortion, disappearance, murder. Many end up in mass graves.

Reportedly over 1,000 refugees–mainly from Syria but also Pakistan, Afghanistan, Palestine, Iraq, & some African countries–enter Macedonia daily from Greece heading north to European countries not yet completely under Troika austerity policies. Many refugees are rushing to pass through the Serbian-Hungarian border before Hungary has finished building the razor-wire barrier fence.

According to UNHCR (the UN refugee agency), over 124,000 refugees arrived in Greece via the islands of Lesvos, Chios, Kos, Samos, & Leros–just till the end of July. There are an estimated seven to eight thousand still on Kos waiting for Greek authorities to process transit papers so they can move on to northern Europe with less hassle. That would suggest that thousands of refugees have moved on without waiting for papers to be processed & are going to face the immense difficulties undocumented workers face all over the world.

This barbarism faces refugees & immigrants everywhere, on every route that millions are traveling. Immigration is a human right. Open the damn borders.