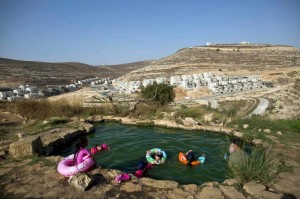 What a charming & bucolic scene in the occupied West Bank. The Yahoo caption reads: “Israelis cool themselves in a water spring located near the Jewish settlement of Givat Ze’ev in the West Bank, north of Jerusalem….Temperatures in parts of Israel & Palestine rose to 50 degrees Celsius as a heat wave visits the region.”

Givat Ze’ev, founded in 1982, is one of the largest Israeli settlements in the West Bank with a population of around 15,000 & development plans to expand to 25,000 in the next five years. It’s built on 2,000 acres of confiscated Palestinian land with maps for further expansion. Palestinian analysis of the expropriation plans determined that expansion of settlements & the road being built to facilitate travel between Jerusalem & Tel Aviv would confiscate prime agricultural land, including 30,000 olive trees, which 24,000 Palestinian villagers depend on for livelihood. The plans also include annexing several Palestinian villages & displacing residents into refugee camps.

Since it’s only a 15 minute drive to Jerusalem, Givat Ze’ev is a desirable location. Housing plans & sales are being marketed especially to English-speaking orthodox Jews making aliyah to Israel. Aliyah is the fundamental tenet of Zionism, sanctified in Israel’s Law of Return, that claims all Jews–who’ve been living all over Kingdom Come for 3,000 years–have a legal right to immigrate, settle, & become citizens of Israel–forcibly expropriating & displacing Palestinians. It’s kind of like Irish-Americans laying claim to the Rhineland from whence their Celtic ancestors came 3,000 years ago.

For Israel, the settlements serve two purposes: the expansion of a Jewish-only state (necessarily entailing the displacement of Palestinians) & secondly, it solves the housing problem within the confines of Israel. Not just that rents are too high in Israel for residents but affordable housing cannot be built, including for those doing aliyah, in a society that prioritizes military expenditures.

The US occasionally plays lip-service to international law by objecting to the illegal settlements but it consistently flouts it by vetoing resolutions in the UN Security Council condemning the settlements. The US government also provides relocation money & language courses to learn Hebrew to Zionist settlers from the US. If Obama is judged by deeds & not words, his regime is up to its eyeballs in the expropriation of Palestinians.

The only effective response to Israeli settlements is to build the economic, cultural, & academic boycott of Israel (BDS).