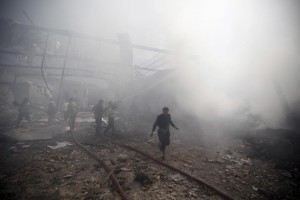 The Saudi-led, US-backed carpet bombing of Yemen receives no coverage in US media while the bombing is taking out everything that stands including homes, government buildings, hospitals & clinics, & this food storage warehouse. The bombing has gone on nonstop since March. Thousands have been bombed to death, thousands injured, nearly two million displaced & made homeless.

This barbaric siege isn’t about Houthi & al-Qaeda fighters; it’s about bombing the Yemen uprising in 2011 to smithereens–& it is intended as a warning to peoples everywhere that this is what’s in store for them if they attempt a revolution against tyranny. Yemen has become a wasteland of rubble, a killing field like Gaza & Syria.

If there is to be change in this world, the international antiwar movement must be rebuilt. Men & women of good will cannot allow the regimes with bombs to take out this planet when people rise up against outrageous injustices.

Solidarity is not a sentiment but it is action. Our deepest regrets to the people of Yemen (Iraq, Afghanistan, & elsewhere) that we have not yet been able to assemble the power of solidarity against such barbarism. It is the historic task of our era.