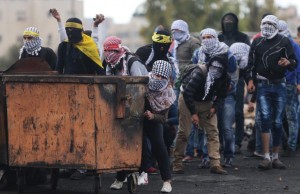 Photojournalism completely belies the media narrative of a Palestinian “stabbing Intifada,” as it was dubbed by Bernard-Henri Lévy, the French guy who tries to give Israeli apartheid & Islamophobia a human face. He calls himself a “nouveau philosophe” but he’s just a washed-up apologist for social hatred dressed up like a bon vivant. Israel would be wise to dump him.

There are many photos of Palestinians shot dead after allegedly attempting to stab a soldier. Since October 1st, 65 Palestinians, including 14 children, have been shot & killed. Most of these fatalities were in the occupied West Bank, not Jerusalem as media claims, nor in occupied East Jerusalem which is on lockdown & under martial law. Some eyewitnesses have testified they saw soldiers drop knives near the bodies of those Palestinians who were shot. That’s exactly why Amnesty International is condemning Israel for summary executions of protesters.

Palestinians are reporting that Israeli soldiers are obstructing Palestinian ambulances & attacking ambulance medics–& there is in fact video documentation of that. So it’s curious (or isn’t it?) that there are photos of Israeli ambulances evacuating Palestinians who were shot. Is this to give ethnic cleansing & extrajudicial executions a human face?

This is another photo worth a thousand lies. Palestinian protesters near Ramallah, West Bank, are demanding Israel return the bodies of those shot dead–a right embodied in several international laws. They face off against Israeli tanks, bulldozers, tear gas, AK-47s & Uzis armed only with rocks & a dumpster.