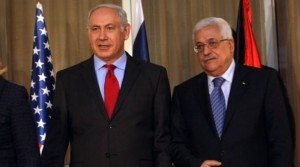 By whose authority does Mahmoud Abbas speak? He calls himself president of the State of Palestine but there is no such state. He was elected head of the Palestinian National Authority, formed out of the Oslo Accords to preside over the surrender of Palestinians. But his term in that treacherous capacity ended in January 2009. So who the hell is he talking for if not the most conservative forces in Palestinian society? Surely he doesn’t represent those involved in Intifada on the front lines of struggle against Israeli occupation.

He’s in the Netherlands right now when he should be in the West Bank screaming bloody murder about the Israeli pogrom against unarmed Palestinians. And who’s he talking to in Holland? Members of the main Dutch pro-Israel organization (Center for Information & Documentation on Israel).

He assured them the Oslo Accords would not be canceled even though they have demonstrated in Palestinian blood what Edward Said & others said about them when they were signed: they are the terms of Palestinian surrender. He added they would not be canceled as long as “Israel respects its obligations.” Israel has no obligations under the accords which they have ever honored. He’s simply talking through his ass again.

But Abbas the betrayer went on, saying the Palestinian Authority (PA) “never asked anyone to boycott Israel,” but only products produced in the West Bank settlements. No the PA didn’t ask for a boycott but 174 Palestinian organizations did ask for a boycott of Israel–economically, culturally, & academically–& nothing has proven more effective in exposing Israeli apartheid & ethnic cleansing. So Abbas & the PA have some explaining to do about who they represent.

Not content with those treacheries, Abbas continued: “I am not asking for a right of return for six million Palestinians; I want a solution for them.” Can Abbas the betrayer explain what other possible solution exists for six million people living in refugee camps? And why he thinks for one moment that he has the right to piss away their rights?

(Photo of Netanyahu & Abbas the betrayer by Kobi Gideon/Flash90)