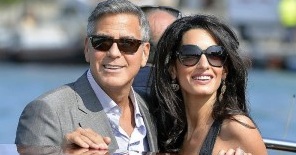 For those who may not yet know, you haven’t lost a golden opportunity for love with George “Clueless” Clooney & he didn’t marry what media describes as ‘a very special woman’ today in Venice. Clooney & his bride, Amal Alamuddin, are both portrayed by media as progressive & humanitarian. In truth, Clooney is an international playboy who episodically makes brief forays into warmongering over Sudan alongside his mentor John Prendergast, who is called a human rights activist by the media but is more likely a CIA operative actively engaged in undermining democracy in African countries like Sudan & Uganda.

Clooney has neither said nor done anything to protest US wars in Iraq, Afghanistan, or elsewhere & has never exhibited interest in a single other political issue. Why he’s impassioned when it comes to sending troops to Darfur & has more than once testified in the US congress & grandstanded for that purpose likely has more to do with being a celebrity shill of the Angelina Jolie sort. It’s just another role & it gets them invited to White House soirees.

Alamuddin is described in media as a human rights lawyer but that’s only if you agree with the US Supreme Court that corporations are people too. Her clients as a lawyer with a New York corporate law firm included Enron, & Arthur Andersen, the accounting firm that helped Enron cook the books.

Other than Wikileaks founder Julian Assange, her clientele is not impressive from a human rights perspective. On the contrary. She represented corrupt Ukrainian politician Yulia Tymoshenko; Kofi Annan, now the chair of The Elders who actively oppose the BDS movement for Palestinian solidarity; & most despicably, Hamad Al Khalifa, the king of Bahrain, during his violent assaults on the democracy movement in 2011. She now works for a London law firm who describe themselves as involved in “criminal justice, public law, immigration, employment, human rights, & civil liberties work.” That doesn’t say which side of the aisle they work.