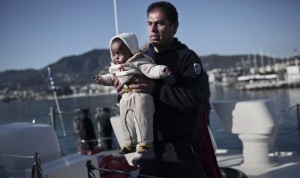 The baby face of modern immigration: a Greek coast guard officer (notably deficient in nurturing skills) is carrying an infant off a boat at Lesbos, an island flooded with immigrants fleeing Syria, Afghanistan, Palestine, Iraq, African countries, & elsewhere. We aren’t told whether either of the baby’s parents have survived.

The SYRIZA government has promised more humane treatment of immigrants but they have a lot of remedial ground to cover since the previous regime was so barbaric. Before SYRIZA took office, conditions for immigrants in Lesbos were reported as lacking sufficient facilities or housing of any kind. Immigrants were seen sleeping under cars to protect themselves from rain & cold.

Immigration is a human right! We hope this baby will elude the ugly forces of racist immigration & lead a blessed life.