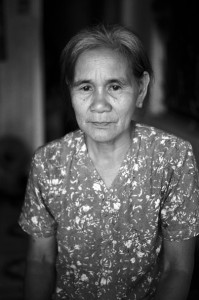 On the 40th anniversary of the Fall of Saigon when the North Vietnamese army routed the US military & ended the Vietnam war, we should take a moment to honor the Vietnamese resistance, vilified then in the US as the Việt Cộng.

Mythology & war propaganda coming out of WWII & the Korean War made the US seem an impregnable military force, especially against a colonial people. But the Vietnamese regular army & guerrilla forces had been fighting Japanese & French colonialism for 40 years & were resolute & steeled in battle. Many people today fighting the yoke of neoliberal colonialism may not have that military advantage & will have to build international solidarity, the second phalanx of opposition to tyranny.

Women played an important role in the Việt Cộng (both a guerrilla & regular army). This woman veteran is Vo Thi Tai from Quảng Ngãi province located halfway between Hanoi & Saigon (now named Hồ Chí Minh City). The province was a center of resistance to colonial occupation & the site of numerous ambushes of South Vietnamese & US troops by Việt Cộng forces. Thus it was the site of considerable US military action including massacres of entire villages. Some of the massacres are unreported since they were conducted by South Korean forces operating as part of US operations. My Lai is located in Quảng Ngãi–which makes it clearer that the My Lai massacre was not just an individual act of barbarism but part of US military operations in the province.

In 2012, a US Vietnam War veteran named Don Unrau traveled to the province & did a series of portraits of Việt Cộng veterans. He called the series “equal parts homage & reconciliation.” This portrait of Vo Thi Tai is one in the series.

Vietnam is still suffering from the war; many hundreds of children (as in Iraq) are born with catastrophic disabilities & only families to care for them. There are still thousands of land mines & soil contaminated by Agent Orange & Napalm. Many people are disappointed the Vietnamese regime is going the neoliberal route. But nothing can take away the Vietnamese contribution to humanity when they routed the mightiest military machine in the world; when their struggle showed humanity the power of resistance & international solidarity.

Our fullest respect & homage. May we rebuild the international antiwar movement to render the same solidarity to Afghanistan, Pakistan, Iraq, Somalia, Yemen, & elsewhere.