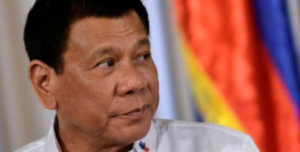 Some of the adorable things president Rodrigo Duterte says that make him such a beloved & revered hero to Assadists:

–“Forget the laws on human rights.”

–“You drug pushers, hold-up men & do-nothings, you better go out. Because, I’d kill you.”

–“Hitler massacred 3 million Jews. Now there is…3 million drug addicts in the Philippines….I’d be happy to slaughter them. At least if Germany had Hitler, the Philippines would have me.”

–“I will burn down the United Nations if you want. I will burn it down if I go to America.”

–“”If you are corrupt, I will fetch you using a helicopter to Manila & I will throw you out. I have done this before, why would I not do it again?”

One of Duterte’s political critics said: “The purpose of the war on drugs is to stifle opposition & castrate dissent. It is working.” Of course. That’s why China is flooding the Philippines with drugs but Duterte calls it an ally & insists it is unfair to blame Beijing. Instead he sanctions vigilante death squads immune to prosecution to gun down thousands of poor, young Filipinos on the streets.

What affinity do Assad supporters feel with the death squads & these precious & endearing sentiments of Duterte? Is it because the psycho-killer calls himself a socialist? That might explain why so many Assad supporters have become renowned for incoherence & zombie politics & are ardent admirers of Joseph Stalin. The walking dead with assault rifles look like socialists to them.

There are political explanations for these affinities between Assadists, Duterte, Putin, & Trump but the real answer lies in abnormal psychology. It’s called demented.