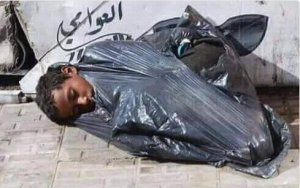 A homeless child in Yemen sleeping in a discarded plastic bag:
March 2017 will mark the second anniversary of the bombing campaign in Yemen by the Saudi coalition, armed & supported by the US & UK.

Nothing speaks more powerfully to the imperative of rebuilding the international antiwar movement than what war has done to millions of children just in the past 20 years.

There are no humanitarian wars. There is no legitimate rationalization for bombing civilians. War planes, mercenaries, & special forces will never be the methods of freedom struggles. Syria has confused so many on that score. It’s time the movement be rebuilt on historic antiwar principles. That doesn’t mean pacifism; people have a right to defend themselves against violence & tyranny by any means necessary. “By any means necessary” does not include bombing entire cities with hundreds of thousands of unarmed civilians. That’s not a freedom struggle; it’s barbarism.

Somewhere the antiwar movement has gotten lost. It appears the forces of regeneration will come not from the countries with armies & bombers in the field but from those activists around the world who know justice in their bones, understand antiwar principles & don’t accept cheap discounts on them.

Our deepest regrets that millions of children have payed such a price for the historic failure of the antiwar movement to unite. There is urgent need to correct that.