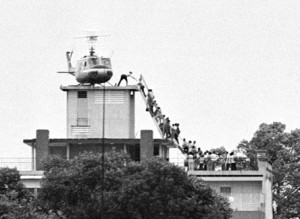 We approach the 40th anniversary of the Fall of Saigon on April 30th 1975, when the People’s Army of Vietnam & the National Front of South Vietnam (known as the Viet Cong) routed the US military, considered the mightiest in the world. It marked the end of the war & nearly 20 years of US involvement. It also marked the reunification of Vietnam.

Opposition to the Vietnam War mobilized millions around the world in every country. In the US alone, there were protests of over a million people. The Vietnamese had been fighting the French for over 40 years & had sophisticated regular & guerrilla armies & a steely commitment to freedom from colonialism but their victory was not solely military. International solidarity played an important role by weakening the options of US militarism.

Many activists of that era committed their lives to organizing against the war; many activists in the antiwar movement today are veterans of that war along with veteran antiwar activists. For them the Fall of Saigon was a glorious moment, the kind where you remember exactly where you were. It’s not a reliving of youth’s glory days to do a retrospective of that event. It is imperative to understand that US militarism can be defeated & that mobilized international opposition is a vital part of that.

This is one of the iconic images of the evacuation of Saigon (now renamed Hồ Chí Minh City) taken on April 29th 1975. It’s often identified as the roof of the US Embassy being used for evacuations. In fact it’s the roof of an apartment building reserved for employees of USAID & the CIA, about a half mile from the embassy. The airport & US airbase couldn’t be used since the North Vietnamese Army was shelling them & shooting down planes trying to take off. The wreckage littered the runway.

The CIA chief in Saigon marshaled South Vietnamese politicians (including the deputy prime minister & defense minister), generals, & police officials who had colluded with the US to gather at his house with their families for evacuation. He had to punch some of them out to quell their hysteria. This photo is the evacuees fleeing justice by boarding a CIA helicopter taking them to US ships off Vietnam. The very definition of rats fleeing a sinking ship.

The same international movement needs to be rebuilt to oppose wars in Afghanistan, Iraq, Pakistan, Yemen, Somalia, Kashmir, Syria, Gaza, & elsewhere. The Palestinian solidarity protests opposing the 2014 Israeli Operation Ethnic Cleansing stand as a model for what is possible.