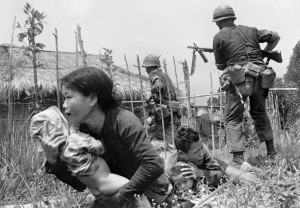 The Vietnam War is not just another in the endless litany of US military interventions. The massive international antiwar movement gave it historical importance for several reasons: it broke the repressive political climate of the McCarthy witch-hunt; it signaled that militarism & colonialism can be defeated; it showed the power of international solidarity & opposition to colonialism. And quite frankly it showed that the US is not a nation of political deadbeats but are capable of standing massively against tyranny & war.

One of the outcomes of the war was the “Vietnam Syndrome,” considered a disease state & rued by politicians & the Pentagon because it was a political mood of opposition to US interventions. The think tanks worked overtime to counter this “pathology,” developing PR gimmicks like “low-intensity war” (anything but low-intensity if you were on the receiving end) & proxy wars. The Vietnam Syndrome was not decisively reversed until the Gulf War, which also signaled the decline of the antiwar movement.

Media usually congratulates itself by attributing antiwar opposition to its coverage. Press censorship is a feature of US wars which was in fact loosened somewhat during the Vietnam War. But with the Gulf War media again embedded themselves up the ass of the Pentagon & we know almost nothing about the barbarisms inflicted on other peoples–except in Gaza by Israel & bankrolled by the US. Being embedded means you report war news from Pentagon press releases.

This is a photo from April 25, 1965, at a time when the Vietnam War was becoming a central issue in US politics & the antiwar movement was erupting. US marines are storming a village searching for “Vietcong insurgents” & completely heedless of civilians under fire. The caption explains: “As was typical in such situations, the men of the village had mostly disappeared, & the remaining villagers revealed little when questioned.” That’s because the men would all have been shot as “Vietcong insurgents” & the villagers did not support US occupation.