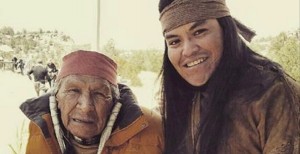 Think there might be a connection between Adam Sandler’s rabid Zionism supporting the expropriation & dehumanization of Palestinians & news that his new western movie is so racist & disrespectful toward Native Americans that Native actors walked off the set?

The movie was described as a satire but anyone who’s ever seen a Sandler movie knows they never rise above sentimentality & frat boy humor. We’re talking lowbrow friends in high places or that crap would never make it to the screen.

The mostly Navajo actors left the set because the script repeatedly degraded Apache women & elders. So the issue isn’t just racism but includes misogyny & social hatred for seniors. Examples given of disrespect are women in the film named Beaver’s Breath & No Bra & an actress squatting & urinating while smoking a peace pipe.
This post isn’t intended as celebrity tittle-tattle but to expose the nexus between white supremacy & Zionism.

(Photo is actors Saginaw Grant & Loren Anthony on the set of “Ridiculous Six,” the Sandler burlesque before they walked off, from lorenanthony on instagram)