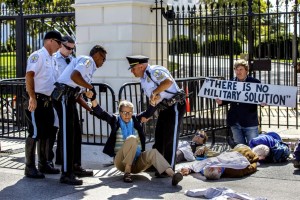 So much for “going quietly into that dark night!” This woman whose youth was in the 1960s & 1970s is in front of the White House protesting US bombing in Syria. There is so much nonsense written about her generation whose gestalt was rebellion against the tyrannies & culture of the Cold War.

We got rid of our beehive hairdos cemented with hairspray, ditched the stilettos, put on bellbottoms & comfortable shoes, & protested & organized for civil rights, women’s rights, gay rights, disability rights & against the Vietnam War. Popular historians are now trying to turn us into uptight, blue-nosed prudes but that’s only to make rebellion look like the death of social life, a living hell of joyless Presbyterianism.

In fact, they were exciting days of ideas & ideals & commitment & many, like this woman, continue the gestalt. Many moved toward passivity & cynicism but the legacy of that generation stands tall. Activists like her continue to build antiwar activity despite the weakness of the movement so that when people in the US get off their leaden asses to oppose these wars, there will be an organizational matrix to accommodate growth.