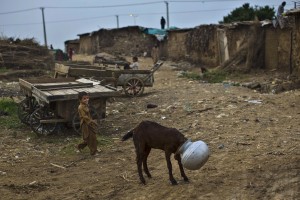 Israel’s Operation Ethnic Cleansing in Gaza, US bombing in Syria, & US war plans for Iraq have necessarily pushed the US-NATO war in Afghanistan out of the headlines. Serial & simultaneous catastrophes seems to be the nature of US militarism & neoliberal colonialism. But it’s important not to forget Afghanistan where drone bombing sorties number in the thousands.

There are reportedly more drone attacks in Afghanistan than anywhere else in the world; in the past year, the US & UK have doubled the number of drone strikes. Studies have shown that only an inconsequential percentage of drone strikes take out the militants US-NATO claim they’re going after; most kill hundreds of civilians including children in the most barbaric way. Unless the generals are all completely incompetent (which is not impossible) one can only conclude that taking out civilians is the real intent of drone missions.

There are gruesome photos of mangled children killed by drones in Afghanistan. May they RIP. This little guy, running to help a goat who got its head caught in a bowl of water, has so far dodged the bombers.

In response to US militarism going completely out of control, there will be pickets, rallies, & protests around the world. Keep this little boy in mind when you grab a placard & head out to join the chorus demanding “US-NATO out of Afghanistan!”