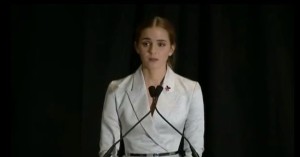 When Wolf Blitzer introduced Emma Watson at the UN meeting on Monday, you had to know there was a bag job coming. As one of those movie star goodwill ambassadors for the UN, she was asked to speak at the launch of the “He For She” UN campaign to engage one billion men & boys worldwide in the fight for gender equality. Oh so noble! And oh what a crock!

Watson’s speech reflected a sincere feminist grappling with issues of misogyny–but dealing with them solely as a personal issue & in that regard she was being played by UN officials. The audience she addressed were government officials, minions & enforcers of misogynist & oppressive policies all over the world. They clapped like trained seals at her words which laid out the basic concepts of feminism–but feminism as a personal matter. That takes the heat off governments.

Feminists of the 1960s & 1970s popularized the slogan “The personal is the political” because, to be frank, men can be devastating in their personal treatment of women; they are often patronizing, rude, insulting, demeaning. And they can be rapists & beaters & a lot of other ugly things. Feminism is partially to strengthen women to stand up against his crap & end it in personal lives.

But feminism is also, & maybe primarily, a political ideology that educates about the sources of women’s oppression; the way misogyny, racism, & class interact; & proposes a political program to oppose & end it. Watson’s speech was bereft of transformational politics–& in more ways than one.

Reflecting her elite position in society, she cited Hillary Clinton’s role promoting a women’s rights agenda. But Clinton’s role has always been part of the political attempt (conducted by the UN & governments) to preempt feminism, neutralize it, personalize it but make it a weapon to advance the most reactionary neoliberal agenda, including war & Islamophobia.

Regrettably Watson reflects that part of the feminist movement that is privileged, obtuse to the politics of feminism & its potential for social transformation. In the circles she’s now traveling in, including elite feminists & government officials, it’s all about male culpability, getting women elected to political office (regardless of their stinking politics), & won’t have a thing to do with governments denying reproductive rights, enforcing discrimination in employment, racism in population control programs, forced sterilization of black & brown women, or lack of childcare facilities.

Watson was played but there’s no need to castigate her for naiveté & the blindness that often comes with privilege. There’s also no reason to follow her off a cliff.

(Photo is screen shot from video of her UN speech)