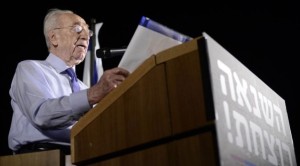 There’s only so much Israeli criminality media can cover up. At some point, chickens begin to come home to roost & the economic, cultural, & academic boycott of Israel (BDS) is bringing on that day of reckoning with Palestinian justice. So when the gay pride march was attacked by an Israeli settler from the West Bank & when settlers torched the family home that killed an infant & seriously burned the rest of his family, the state of Israel knew they had to make an accounting to international public opinion. They’re running out of impunity even though they’re backed to the hilt by the US Pentagon.

At first it was inspiring to see thousands of Israelis in marches in at least four cities marching against the two incidents of violence. But when you take a look at the roster of speakers, you want to know who organized the rallies. Was it progressive, anti-apartheid, anti-occupation forces in Israel or was it public relations in the Israeli government to make it appear Israeli policy isn’t genocidal & isn’t suffering from advanced dry rot?

One of the featured speakers in Tel Aviv today was former president Shimon Peres. Peres, who was born in Poland, began his political career in Haganah, the paramilitary terrorist organization that drove Palestinians off their lands in 1948 & eventually morphed into the IDF. He has been a central figure in the development of Israeli military & apartheid policies. He has a rap sheet a mile long, including serving as Israeli president during Operation Ethnic cleansing last summer without uttering a peep of protest. What progressive activist in their right mind would consider him a suitable speaker at an anti-violence rally!?

His appearance as a featured speaker calls into question whether these protests were genuine expressions of citizen outrage or an orchestrated spectacle to counter Israel’s growing reputation for genocidal violence.

In his speech he claimed the Torah “given to us on Mount Sinai” was a code of values & Jewish principles forbidding murder or incitement to murder. There isn’t a damn thing Jewish about prohibiting murder; every civilized society shares that. But if Israel recognizes it as a principle, why is their entire state policy & military apparatus based on eliminating Palestinians by whatever means necessary?

There was a moment of candor in his speech when he said Israel was facing a ‘battle for its survival as a Jewish & democratic state’. As a democratic state, Israel lost that battle in 1948 when it established a colony on Palestinian territory. Its ethnic cleansing & settlement policies are to finish off that Jewish-only state perspective. Israel bombed the living daylights out of Gaza at least three times in the past six years, particularly targeting children. So when Peres says “those who are prepared to burn babies in the middle of the night & plunge knives into the hearts of our daughters are the enemies of the people,” he’s blowing smoke up our butts. The only thing that concerns this man of apartheid is that Israel be able to build that Jewish-only apartheid state without the impediment of international opposition to their systematic crimes against the Palestinian people.

Answer our man Peres by building the hell out of the economic, cultural, & academic boycott of Israel.