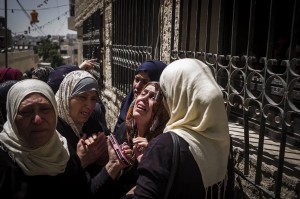 The death of baby Ali Dawabsheh, who burned to death when Israeli settlers torched his family home, testifies to the criminality & barbarism of Israel’s settlement projects in the West Bank. Regrettably, he is not the only Palestinian being grieved right now. The situation in the West Bank of Israeli soldiers fatally shooting unarmed Palestinian youth resembles nothing so much as police homicides in the Black community in US cities.

Last week alone, there were funerals for three young Palestinians shot by Israeli soldiers. Here they are mourning the death of 19-year-old Mohammed Lafi Abu Latifeh who lived in the Qalandia refugee camp & was shot to death on an arrest raid. Israeli reports about what happened contradict those of Palestinian witnesses. Israeli authorities claimed he was a terrorist suspect–& in the racist thinking of an apartheid regime, summary execution is legitimate.

Yesterday, 18-year-old Laith al-Khaldi, was shot to death by Israeli troops at a protest over the murder of baby Ali. His funeral was held today.

Media is trying to pull a fast one on the truth by referring repeatedly to the settlers as “Jewish extremists.” In fact, extremism is the very nature of the Israeli settlement projects & the military occupation in the West Bank. Netanyahu can cry his crocodile tears about baby Ali to repair Israel’s murderous image but his inflammatory rhetoric against Palestinians, his murderous siege of Gaza, his assaults on unarmed protesters incites violence from settlers & tells us the “extremists” are the henchmen of the Israeli regime & another flank of the occupation.

Build the hell out of the economic, cultural, & academic boycott of Israel. Don’t buy a damn thing made in Israel.