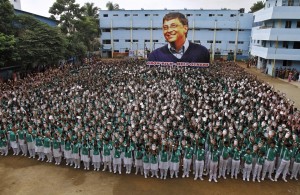 Schoolchildren in Chennai, India are here celebrating the 60th birthday of Bill Gates. This is so disturbing for so many reasons–beginning with worshipping false idols. The original sin is teaching small children to fawn & do hero worship.

It is particularly grotesque in India to teach children to grovel before an image of Bill Gates, not because of the banal slogan “Grow Rich-Help Others”–although that is bad enough. But primarily because the Gates Foundation is proud of its collaboration with the Indian government & USAID in population control/eugenics programs. These are not family planning centers with prenatal care, maternal & infant nutrition programs, birth control, & abortion services but forced sterilization camps with squalid, unhygienic conditions where women are sent home post-surgery contrary to sound medical practice or dumped in nearby fields to recover, & where there have been several deaths. Sterilization, including forced sterilization, is the cornerstone of India’s corrupt family planning system.

We don’t know who these kids are or why their parents would allow such indoctrination. Like in most countries, schools are places to fill children’s heads full of rubbish to make them subservient & politically stupid. It’s not unlike holding up Christopher Columbus as a hero in American schools or Junipero Serra as a saint in the Catholic church.