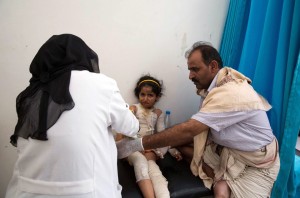 The Saudi-led, US-backed coalition of military juntas & feudal monarchies bombed a Doctors Without Borders/MSF hospital in Yemen on Tuesday. MSF says the building was clearly marked on the roof & that they provided GPS coordinates to the coalition two weeks ago.

According to MSF, about 200 war-wounded patients were admitted to the emergency room every month. The maternity ward, lab, & emergency room were all destroyed. 25,000 Yemenis have been injured so far in this barbarous war & 5,000 killed. Thousands of buildings, including homes, have been destroyed & 1.5 million people displaced. UNICEF reports this is the 39th health facility bombed in Yemen since March.

This hospital bombing comes only a few weeks after the US bombing of an MSF hospital in Afghanistan & there have likely been many more health facilities bombed there by US-NATO forces in the 14 years of the war. This one made news because it was run by MSF who are screaming bloody murder, as they should. Israel directly targeted hospitals & clinics (not to mention ambulances, homes, schools, refugee centers) in its murderous 2014 carpet bombing siege of Gaza.

It’s very clear that those with the bombers think might makes right & they are exempt from international law. International law is more an ideal anyway than a reality because it is legally acknowledged to be unenforceable–especially when the UN most often brokers for the war-makers. There is no humanitarian way to bomb people, no matter how much establishment human rights groups try to make it so.

The only effective response to all these military assaults making the Middle East a killing field is to rebuild the international antiwar movement demanding an end to the monstrous wars. That is the historic mission of our generations–& one we cannot fail to fulfill.

Photo is young girl with third-degree burns being treated at Al-Jumhori Hospital in Sana’a which has the only burn ward in the country. It’s not certain if the hospital still stands.

Our fullest solidarity with the people of Yemen.