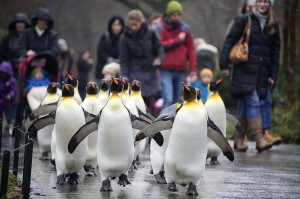 The media caption to this photo said: “Visitors follow king penguins as they march through the Zoo in Basel, Switzerland. The penguins are only let outdoors for a walk in the winter.”

Well everybody loves a penguin but they aren’t on this earth to entertain human gawkers or enrich zoo keepers. They’re from Antarctica where they spend their lives waddling around, socializing, & foraging in the ocean, not warehoused in cement barracks.

They’re considered a “flagship species” in conservation biology which still can’t define what the term means so meanwhile it’s become a fancy marketing term for super-exploitation. By raising the public profile, they can make more dough parading them. There’s more cruelty in these zoos under the guise of biodiversity conservation than you can shake a stick at.

In a humane society the entire concept of zoos will be rethought along with circuses. You don’t have to get up close & personal with gorillas & lions but treating them like spectacles will not be an option.