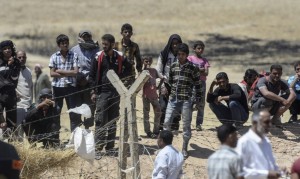 The tsunami of immigration around the globe–from the US southern border to Australia to the Mediterranean & Andaman Seas–highlights the importance of photojournalists. Their pictures show us the humanity of those depicted by regimes as grubbing hordes. Once we see their humanity it becomes harder to turn our backs on them. The photos create an opportunity for immigration & human rights activists to counter the racist, xenophobic rubbish promoted by nationalists.

These are Syrian refugees surging with thousands of others on the Turkish border near Akcakale, Turkey. There are all sorts of people in this photo from young to old, all fleeing war. It must be hotter than hell there; they must be traumatized & exhausted, thirsty & hungry. And very scared.

They’re being held off by barb wire fences & water cannons while Turkey takes measures to limit the number allowed to enter the country–& it should be added, in violation of international law. It’s beyond dispute that millions of refugees are too much for one country to cope with. Especially when, like Turkey, they’re under the whip of IMF austerity policies & militarized to the nth degree by participation in NATO.

If neoliberal regimes can’t do that because they’re imposing austerity on their own citizens, then we need to rethink the continuing existence of neoliberal rule, the barbaric phase of capitalism. Human life is the first priority & no human being is illegal.