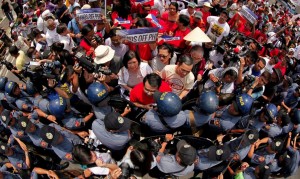 It’s not certain how large the Filipino antiwar movement is but it is certainly one of the most active in the world. Every cavalcade of US politicians is met by protesters because they’re primarily visiting to strengthen military bonds between the two regimes.

They’ve been protesting the buildup of US military might in the South China Sea ostensibly over competing claims with China to islands that belong to neither country–but really over competing claims for domination of the region. The US buildup includes a new military base in Australia, new naval bases in the Philippines, & joint military exercises with several armies in the region, including the Philippines.

This recent protest in Manila at the US embassy was confronted by riot cops–now called “anti-riot police” by those who change language to change perception of reality. It’s of the same genre as “collateral damage” & just as odious.

Our deepest respect for the Filipino antiwar movement. Perhaps when the US antiwar movement is rebuilt we’ll be able to invite speakers here in solidarity. (And it won’t be an embarrassment for one of us to speak there,)