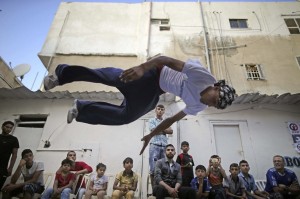 There are many things you could say about this photo of a young guy in Gaza exhibiting parkour skills to kids at the Gaza breakdance crew headquarters in Gaza City: there’s the wondrous ways of cultural fusion with breakdance & parkour; the athletic prowess involved; the history & popularity of parkour & breakdance among Gaza’s young; the phenomenon of doing parkour against a backdrop of Israeli bombs & bombed out buildings. You could even just say the photo shows kids around the world are just plain nuts with all that daring–even in conditions of ethnic cleansing.

The Guardian-UK chose to approach this photo quite differently: as Israeli war propaganda. It said “The devastation across Gaza can still be seen nearly a year on from the 2014 conflict between Israel & Palestinian militants.” The Guardian isn’t being demur with the truth. On the contrary! They’re lying & choosing to cover for Israeli carpet bombing. Israeli bombing took out entire neighborhoods, hospitals, schools, refugee centers; the murderous bombers targeted children. Deceit is the character of propaganda & still the truth was out & over a million people protested genocide in Gaza in that “2014 conflict.”

What is extremely interesting is the cultural fusion of New York Black & Latino street dance & hip hop & the obstacle course training of parkour with Palestinians in Gaza beginning around 2005, just a couple years before Israel imposed the blockade of Gaza. Part of it is surely the international appeal of hip hop; but it also appears to be rooted in resistance, defiance, determination against extermination.
Comments by the founders of parkour & breakdance in Gaza are quite telling. One group describes their mission as “The power to break the siege by dancing, dreaming, & teaching humanity!!”

Our fullest solidarity with the crazy-assed youth of Gaza. Please don’t break your necks.