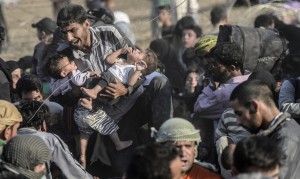 This photo is from yesterday, taken at Akcakale in southeast Turkey on the border with Syria. Syrian refugees are breaking down barbed wire fences to enter Turkey in flight from ISIS thugs & warded off by Turkish water cannons.

We witnessed a similar scenario in the Andaman Sea just a few weeks ago when Rohingya were denied refuge by several countries & then “rescued” by the Myanmar navy & brought back to the site of their violent persecution.

At the time, the Turkish regime announced it was dispatching a navy ship to rescue the Rohingya. Is there any evidence they ever showed up? They also offered aid to Malaysia & Indonesia to build settlement centers for the Rohingya. Was that just big talk too? Because when it comes to humanitarian aid, politicians promise the sky & deliver zip.

Immigration is a human right. But marauding around the planet, tearing it up for purposes of plunder & control, creating massive human dislocation is not a right. It is neoliberalism, the barbaric phase of capitalism, & human beings have a right & a duty to children to put an end to the barbarism.