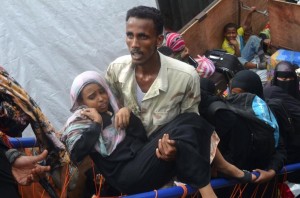 This is a situation fraught with the ugliest ironies of neoliberal militarism. This young man is carrying a sick woman off a ship docked in a Somali port fleeing the Saudi-led (& US-backed) war against Yemen.

It’s a gruesome scenario. How many cruelties can some people endure? And others be allowed to impose? You can blither on about the problems with the Houthis & Al Qaeda in the Arab Peninsula. But the political problems of Yemen are for the people of Yemen to resolve. As we saw in the massive & impressive Arab uprising in Yemen, many of them have strong ideas about what is needed & all of their ideas begin & end with democracy. None of them include US intervention or Saudi Arabian bombing. And the same is true in Somalia & every other country. The people of the US & Saudi Arabia aren’t that fond of their own regimes & can’t for the life figure out why a half-baked feudal monarchy & a militarist war machine think they have the right to bomb “democracy” (spell that economic & political control) into others.

US & Saudi Arabia out!