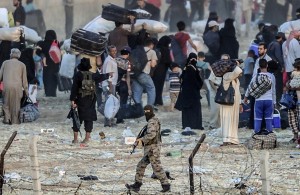 Last week, thousands of Syrian refugees surged at the Turkish border at Akcakale fleeing from fighting between ISIS, Kurds, the Assad regime, & US bombers. The Turkish regime met them with water cannons & kept them standing behind barbed wire fences for days without shelter, water, or food while they tried to figure out a way to keep them out.

Yesterday, photos from Akcakale show refugees pushing through the barbed wire, breaking down the fences, passing infants & children across the fence while the Turkish military bombarded them with water cannons. This photo, also from yesterday, shows ISIS thugs railroading Syrians back from the fences to the city they fled. What more need be said in condemnation of the Turkish regime?

As the largest military component of NATO, Turkey has received billions of dollars in US economic & military aid for decades, ostensibly for counterterrorism & “regional stability.” The US has hundreds of military personnel permanently stationed in Turkey & has negotiate to  use Turkey for assaults across Iraq’s border. Turkey itself plans on deploying troops into Iraq, not to engage in combat they claim, but to “marshal refugees & safeguard an ethnic Turkish Turkmen minority in the Kurdish controlled region.”

So while they’re driving thousands of Syrian refugees back into the clutches of ISIS they’ll be rescuing Iraqi, Turkish, & Kurdish refugees from ISIS in Iraq? That’s the biggest pile of horse manure they’ve tried to peddle since the last time the Turkish regime opened its trap. That’s called Pentagon-speak.

Nothing speaks more loudly to the regional destabilization in the entire Middle East, caused by US-NATO, than the millions of refugees trying desperately to escape war & bombing.
No to US-NATO wars! Open the borders!