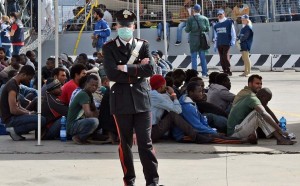 It didn’t take too long into this massive humanitarian & immigration crisis in the Mediterranean before someone raised the question, “Why aren’t African countries helping the immigrants?” You mean the countries they’re fleeing from? The ones run by dictators like Eritrea, the war zones like Somalia, or the ones where a third of the people live under $1.25 a day like Gambia? It’s a remarkably trite question, evincing not a whit of understanding about how the world is run. Or how it should be run.

Palestinians have for years been taunted with the same question, as if the lack of support from Saudi Arabia or Egypt or elsewhere reflected badly on the political justice of the Palestine cause. What is justice for Palestinians compared to billions of military weaponry from the US & Europe to use against their own rebellious populations?

The world is not run by ethnic identities but by an oligarchic system where power accrues to wealth & wealth to power. The Saudi prince & Egyptian general have no more affinity to Palestinian rebels against Israeli apartheid than they do to the rebels in their own societies who they torture, incarcerate, & murder.

The question shouldn’t be why aren’t African countries helping but why are European countries letting them drown?

This is a group of rescued immigrants from Libya in the Messina harbor on Sicily. As you can see, many are without shoes.

Open the damn borders! Immigration is a human right!