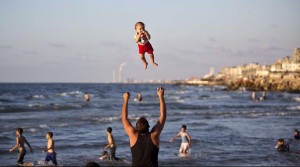 After surviving 50 days of apocalyptic destruction, the people of Gaza must be struggling to regain equilibrium while grieving loss, dealing with homelessness, being without power & sanitation. Celebrating survival has so many heavy provisos, including the continuing Israeli blockade of Gaza–so it is lovely to see children out & about at the beach again & this man playing with his baby (12 days after Israel’s ceasefire) without fear of being bombed.

Those who witnessed the gruesome & barbarous assault on Gaza need also take a deep breath before plunging into building the economic boycott (BDS) of all Israeli products (barcode beginning 729) with rallies, teach-ins, speak-outs, forums. It’s a whole new world for Palestinian solidarity which is now international & massive. Israel & its Zionist supporters are trying furiously to clean up their new image problem; the Exodus mythology, so carefully constructed for 66 years, was blown to shreds by their bombs. Israel is no longer viewed as a righteous, beleaguered nation beset by terrorists but a monstrous military machine that mows down Palestinian children, claiming they’re going after Hamas rocket nests.

Regrettably, the way Zionists are dealing with their image problem is with racism & increased Islamophobia that exposes the supremacist & colonial ideology at the heart of Zionism. Islam & Arabs are the new boogeymen we’re supposed to be afraid of or they’ll eat our children–just like “commies” of the McCarthy era put fluoride in the water to corrupt the morals of youth. If this crap isn’t opposed in the boldest & most steadfast way, we will wind up in another era of repression with free speech as the first casualty. The fight for Palestinian justice is an essential part of the fight for democracy around the world.