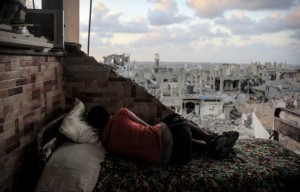 Images from the Zionist Armageddon in Gaza: it really is an end time battle between justice & tyranny because Israel really did go too far this time. It’s been riding so high for so long on Exodus mythology that Netan-psycho-yahu didn’t realize there would be a day of reckoning–just like the Bible says even if you don’t read it or think it’s a historic work. Netan-psycho, driven by racism & irrepressible political & economic pressures within Israel, presided over the beginning of the end for Zionism.

This young boy sleeping in the rubble of his destroyed house is surrounded by devastation. Palestinians took a tremendous beating. It should be pointed out it’s likely there are people entombed in that rubble which is going to sit there for a long time while Israel continues war by means of blockade. But Palestinians no longer stand alone–& that will make all the difference.

There is no counterposition between protest rallies & building the economic & cultural boycott of Israel (BDS). The point of it all is to educate, agitate, organize to defend Palestinian justice, demand Israel lift the economic blockade of Gaza, & demand governments end military aid to Israel. For the irredeemable knuckleheads who continue (after Operation Ethnic Cleansing) to oppose BDS because it will hurt Israeli workers, there is only one question (make it two): How does it feel to be on the wrong side of history? How does it feel to stand with apartheid & genocide?

For those who believe in justice, there is only one side: that of Palestinians against racism & colonialism. There is no middle ground.