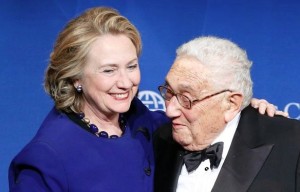 At the sight of these two odious creatures, invidious animal comparisons leap to mind–from bovine to serpentine to reptilian. And the animals rise up in a chorus of rebellion. So we leave their physiognomy to speak for itself & for lives spent in service to vanity & all that’s ugly in this world.

Clinton is signaling here to all those corporate & political forces Kissinger serves so well, so shamefully, & so murderously that she too will bend her knee to their service if they reward her with false honors of the kind he racks up. Depravity worked for Kiss-ass-inger; she hopes it will work for her too.

In the 1950s, the ruling elite took a nonentity at Harvard who was full of himself & could wing an IQ test, an unscrupulous, devious, cynic wedded to no ideology except self-aggrandizement & they turned him into a minion extraordinaire, a courtier to power. All they had to do was stroke his vanity which is his guiding light.

Since his student days he’s been known for a certain way of operating: flattering & sniveling deference to authority figures but abusive, vindictive, manipulative, deceitful with those he deems subordinates. Many of his biographers claim he intellectually towers over all others but when you read their panegyrics you see they’re in no position to judge.

Idealism is no part of his nature & this he considers intellectual freedom because he has no conscience to answer to. He’s been a windbag since his first attempt at authorship writing his dissertation. None of his books come in under 400 pages; his two volumes of biography come in at just under 2,500 pages–& there probably isn’t more than a couple truths in the entirety.

He has a new book coming out–probably another ten-pounder–on the new world order. He was one of the political architects of the Washington Consensus, the neoliberal approach to plunder orchestrated by the World Bank, IMF, & Pentagon. Global economic plunder is ramming against the parameters of the nation-state & they haven’t a clue how to deal with it because for all their feigned intellectualism, they don’t want to face that capitalism has entered its barbaric phase & is whirling out of control.

Joshua Cooper Ramo is a chief officer & partner in Kissinger Associates, the secretive consulting firm owned by Henry whose clients include some of the largest corporations & investors in the world. Ramo, who coordinates investment in China, wrote “The Beijing Consensus”, a ‘wither China’-type article elaborating the Chinese economic model as an alternative to the Washington Consensus. Liberal critics claimed Ramo ignored that degraded labor, including child labor, was the core of China’s economic success when that was probably what most appealed to him.

A few years ago Ramo authored another book described as “provocative” by reviewers who couldn’t figure out what the hell he was talking about. Not to worry! He wasn’t talking about much. His book is called “The Age of the Unthinkable: Why the New World Disorder Constantly Surprises Us & What We Can Do About It”. He suggests that Henry’s generation ran the world according to outdated idées fixes & methods when what is needed in the era of globalization is the pragmatism, flexibility, & resilience of hedge fund managers & Hezbollah operatives. (If the profundity escapes you, you’re not alone.)

Trendy thinking isn’t Henry’s style. He prefers the turgid rather than glib broad-spectrum theorizing. The teaser to his book circulating now in the media is just chock-full of imponderables. His new book is likely an attempt to show he hasn’t lost it as Ramo claims. Now if there’s one thing Henry knows, it’s how the system works–or rather how to work the system. For all his vaunted brilliance, Henry failed in many of his negotiating strategies (Le Duc Tho who negotiated for North Vietnam made chopped liver out of him & refused to accept the Nobel Peace Prize with him in 1973) & relied solely on deceit, maneuvers, assassinations, intrigues, treacheries, & above all the persuasive power of bombs & mass murder. If countries didn’t bow graciously to bribery & plunder, he just bombed them into smithereens or overthrew their governments. Which raises the question, if he’s so damn smart how come he relied primarily on brute force? His international rap sheet for war & human rights crimes is a mile long & touches every continent: Vietnam, Chile, East Timor, Cambodia, Laos, Nigeria, Angola, Argentina, Palestine.

Henry, & likely Ramo too, know how the system works but they can’t control it & most importantly they can’t expose it–if they want to keep working it. So they talk gibberish & gobbledy-gook which they feed to gullible undergraduates to make it appear capitalism is inspired & democratic rather than out-of-control plunder that is bringing down the planet & making the lives of millions a hell on earth.

And that’s what Hillary wants in on. That’s why she’s putting her gnarly arm around his grotesque head. And she is what they call “the lesser of two evils”?