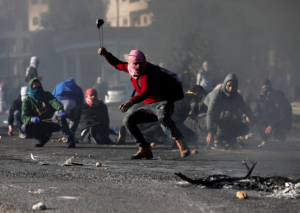 When you see the extremes of violence these young men are up against, you respect them even more as fearless freedom fighters. Armed only with stones & sling shots, they’re facing one of the best equipped & brutal armies in the world. These young, mostly working class stone pelters function as a civilian defense guard for unarmed protesters against tear gas, skunk spray, beatings, rubber bullets, & being mowed down with armored vehicles & mounted police.

These protesters are near an Israeli settlement close to the West Bank city of Ramallah. They are not just venting rage at Trump’s provocation but against the entire edifice of military occupation, colonialism, settlements, apartheid, ethnic cleansing.