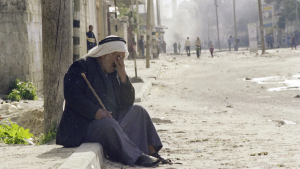 Today is the 30th anniversary of the First Intifada which lasted from December 9th, 1987 to September, 1993. It began in the Jabalia refugee camp in Gaza when an Israeli army truck drove into a passenger car, killing four Palestinians. Protests spread to the West Bank & became an uprising against the occupation in which women played a leading role. Palestinians were met with overwhelming Israeli military force but for nearly six years the movement employed unarmed tactics like general strikes, protests, boycotting Israeli products, refusing to work in the Israeli settlements, burning of ID cards. In some ways, it marks the birth of BDS although it did not become an international campaign until 2005.

Israel used live ammunition on protesters & even then was condemned for targeting children. At least 30,000 children were medically treated for injuries from beatings by Israeli forces. Ten thousand of the children were estimated to be under 10 years of age. At least 1,409 Palestinians were killed & 120,000 arrested. Thousands sustained injuries, house demolitions, crop destructions, & deportation.

The explosive emergence of Intifada marked a major political shift to collective political resistance against the occupation, apartheid, ethnic cleansing after a long ebb in the struggle. There are parallels in the Kashmiri struggle against occupation.

This very poignant photo of a Palestinian man in Gaza shows that the long struggle for freedom takes a toll, mostly in grief from loss & fighting alone against overwhelming odds. The BDS campaign has begun a new period where Palestinians no longer stand alone. Honor & build the economic & cultural boycott of Israel. Buy nothing with barcode beginning 729.