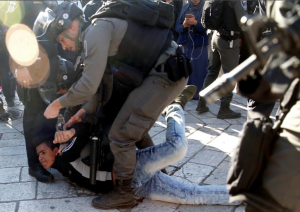 Another picture worth a thousand lies:

The media caption to this photo said: “Israeli border policemen detain a Palestinian man during scuffles at Damascus Gate after Friday prayers in Jerusalem’s Old City, as Palestinians call for a “day of rage” in response to President Donald Trump’s recognition of Jerusalem as Israel’s capital.” When it comes to Palestinians, media has a way of not always lying but never telling the truth.

Let’s clean that caption up so it reflects reality: This is a Palestinian teenager in occupied East Jerusalem being assaulted by an Israeli soldier. The young man was probably denied access to Friday prayers at Al Aqsa mosque because Israel bars males under 50 years of age from entry even though it has no legal jurisdiction over Al Aqsa or over East Jerusalem. The Palestinian teen probably knelt in the public streets to pray with other men & boys & then joined protesters in defense of the mosque compound & in opposition to the whole structure of occupation & colonialism.