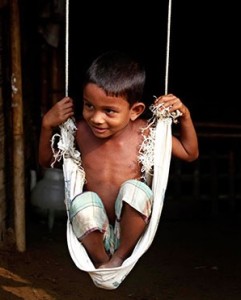 This little guy is a Rohingya Muslim, one of the estimated 150,000 forced into concentration camps in Myanmar. Prior to the elections this year the military-backed regime forcibly entered the camps & took back the temporary identity cards issued Rohingya when they were stripped of citizenship in the 1980s. They are persecuted as pariah & treated as undocumented immigrants though they have lived in the country for generations.

There still has been no accounting of the thousands of Rohingya refugees fleeing persecution last May. The UN refugee agency (UNHCR) estimated 25,000 fled persecution in rickety boats across the Andaman Sea. Boat crews abandoned the ships after a crackdown by the Thai military regime. Although there were dozens of large boatloads of Rohingya without food & water, only five boats were allowed to land in Indonesia & Malaysia.

There was some big talk from countries like Turkey & Ecuador about sending naval ships to rescue the refugees, but no reports they actually deployed anything more than grandstanding rhetoric. Big talking Obama of the toothy grin never even raised the possibility of US ships in the area deploying on a rescue mission. The US navy is for war, not mercy. To anyone paying attention, it was absolutely certain many boatloads of Rohingya had been abandoned at sea to die–except for the five & a few intercepted by the Myanmar regime & brought back for incarceration in concentration camps.

That was in May. So why did it take the UNHCR & Amnesty International (AI) so damn long to report the loss of perhaps thousands of refugees at sea? AI issued its report in October. They needed time to interview Rohingya survivors but shouldn’t they have been screaming bloody murder back in May when the entire world knew of the treachery Rohingya were facing at the hands of the Myanmar & Thai regimes? When the entire world stood witness to the callous indifference toward Rohingya lives?

Indonesia & Malaysia are allowing the refugees to stay only until May 2016. Then what? Then they deport them back to concentration camps in Myanmar?

Enough with the unspeakable crimes against Rohingya Muslims. Sanctions should be imposed on the Myanmar regime until they end the barbaric persecution. But as the US, China, India, & other Myanmar business partners see it, genocide should not be allowed to interfere with making profits. Neoliberalism, the barbaric phase of capitalism has no time for mercy.

AI’s October report called for “coordinated action against human trafficking in a way that does not put people’s lives or human rights at risk.” Shouldn’t they be calling for an end to genocide & demanding refugee rights instead of putting all the blame on traffickers? What about blasting those regimes who couldn’t send even one navy ship to pick up the refugees or that wouldn’t allow them to land?

Solidarity begins with educating ourselves & others about the role our own governments play in the persecution of Rohingya. It proceeds from education to action demanding justice.

This little boy is at the Gong Dokka concentration camp near Sittwe in Rakhine state, Myanmar.