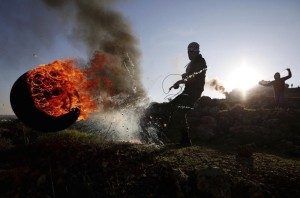 Christmas Day 2015, Ramallah, West Bank: Palestinian protesters here defend themselves with burning tires against Israeli military aggression outside Ofer Prison, notorious for the incarceration of Palestinian children & for human rights abuses. The psychological stress of the occupation on Palestinians must be overwhelming, especially on holidays with the international mantra “peace on earth, good will to men.” Four Palestinian protesters were shot dead just on Christmas Eve.

Christmas is high season for pilgrimage tourism with tens of thousands of Christians from around the world traveling to the West Bank sites where Jesus lived. Jewish tourism is part of this industry to sites reinvented & claimed as meaningful in the Old Testament from 3,000 years ago. This year the season was preceded by three months of an Israeli settler & military pogrom against Palestinians & fallacious reports of a stabbing binge by Palestinians. This apparently dampened religious ardor, even among Christian evangelicals who help bankroll the Israeli settlements & feel they have a vested interest in promoting Israeli colonialism.

Pilgrimage tourists were down by tens of thousands this year. Media reported the catastrophic effects the current conflict had on the local Palestinian economy. What they didn’t report was the long-term economic problems caused by the apartheid wall, economic encumbrances caused by restrictions like special roads for Israelis to the settlements separate from Palestinian roads with numerous checkpoints & barriers, & most of all that Israel long ago hijacked the tourist industry in the West Bank. Israel’s control of the tourist industry in the West Bank, along with the settlements, expose how thoroughgoing & massive the military occupation–& make chopped liver out of pretensions to a bantustate solution. Israeli’s intentions are ethnic cleansing, not neighboring Palestinian bantustates.

The Israeli military controls access & entry to the West Bank, including by tourists. Preference is given to Israeli tour companies over Palestinian firms. Most of the income from multi-million dollar pilgrimage tourism in the West Bank is accrued by Israeli businesses who book tours, provide necessary travel permits, book hotels within Jerusalem, & earn millions in annual income simply ripped off by the occupation of the West Bank.

Bethlehem, about 22 km/13 miles from Ramallah (8 km/6 mi from Jerusalem), has also been a center of military aggression against Palestinians–to protect the 22 Israeli settlements on stolen Palestinian land surrounding the city. Reportedly the streets stink from the skunk bombs used by Israeli troops to disperse Palestinian protesters.

In Manger Square, usually the center of Christmas caroling by Christian tourists, Palestinian activists set up a “resistance Christmas tree”–now for the third year. An olive tree uprooted by an Israeli bulldozer was decorated with barbed wire & teargas canisters & surrounded by barriers taken from protests against Israeli plans to extend the apartheid wall through monastery grounds at a nearby town.

The smell of skunk bombs & sight of a resistance tree do not serve the purpose of Israeli propaganda. Their travel companies are not going to usher thousands of pilgrimage tourists to get a load of apartheid or resistance to it.

Another question of course is how Christians reconcile apartheid with the New Testament. As Zionists do with the Old Testament? Some day a social psychologist will unravel the mysteries of such consciousness.

Stand with Palestinians as they fight for peace on earth by honoring the boycott of Israel (BDS)–barcode beginning 729.