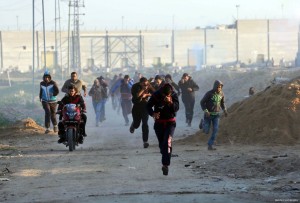 Do you think the news services actually have reporters on the ground covering the military occupation of Palestinian territory? If they do, it’s sure a colossal waste of money since their reports are usually verbatim quotes from Israeli military officials. The reports all have a scripted, press release quality & if editors had an ounce of journalistic integrity or investigative rigor, those handing in these kind of reports would be canned. Or maybe the Associated Press (AP) just calls up the public relations department at the IDF to get a statement. The AP actually copyrights their crap but they need never fear an intelligent reader would want to ‘publish, broadcast, rewrite or redistribute’ it except for purposes of ridicule.

Let us brave the copyright laws & cite the Israeli press release/AP report about the military murder of Hani Wahdan, a 22-year-old man in the Gaza Strip on Christmas Day: “Israeli troops shot at Palestinians attempting to breach the Gaza Strip’s border fence with Israel….Since mid-September, a wave of Palestinian shooting, stabbing & vehicular attacks have killed 20 Israelis. At least 126 Palestinians have died by Israeli fire in the same period, of whom 86 Israel says were attacking or attempting to attack Israelis.”

That’s quite an indictment of Palestinians & any reputable news service would want to verify every accusation in that litany of crimes instead of repeating them ad nauseam & risking mockery as parrots for Israeli propaganda.

This is a photo from an album of that incident in Gaza where young Wahdan was killed. It was published with a story in the Middle East Monitor (MEMO). Raises some questions about the veracity of the AP report, doesn’t it? These are clearly unarmed young men running from a tear gas assault. Some photos show them with slingshots against one of the most sophisticated military arsenals in the world. None were close enough for Israeli soldiers to plant a knife on. So why exactly did Israeli troops open fire on them, especially since there was an apartheid fence between them?

According to the MEMO report–& since they had a photojournalist on the ground they are more credible than Israeli military officials sitting on their asses in Jerusalem–two Palestinians were killed on Christmas Day by Israeli troops & more than 30 others were injured in both the Gaza Strip & West Bank. Nine other Palestinians were wounded in the incident where Wahdan was killed; four more, including a child, were wounded in another incident near the refugee camp of Al-Burij in Gaza; six others were wounded near the town of Khan Younis, also in Gaza. Many suffered respiratory problems from tear gas assaults.

So now let’s ask the questions the AP didn’t ask the IDF. Why did the Israeli military shoot live ammo at unarmed protesters? Did they shoot them for chanting anti-occupation slogans? Did they shoot them as they ran away like here or because they got too close to the apartheid fence? How exactly did they ‘attempt to breach the border fence’? Were the soldiers afraid the guy on the motorbike would challenge their tanks & bulldozers in a vehicular attack? Just how much stupid are we being asked to swallow?

May young Wahdan Rest in Peace; our condolences to his grieving family & friends.

Honoring & building the boycott of Israel (barcode beginning 729) is the strongest expression of solidarity with Palestinian justice.