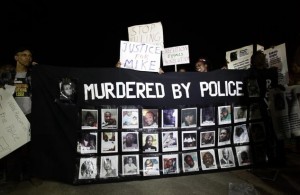 Everyone is on edge awaiting the grand jury verdict in Ferguson. The governor of Missouri has declared a state of emergency & deployed the National Guard. The state & local police are all stockpiled with armored vehicles, tear gas, high-powered weapons. The FBI is putting out alerts about possible unrest.

The last time there was such tension & anticipation over a court verdict was the 1995 trial of O. J. Simpson. When the verdict of innocence came down, media went into high gear with jeremiads about Black & white polarization. Racism & cynicism were emboldened & people spoke openly of social harmony as a pipe dream. It was a scary time. Serendipitously, about a week after the verdict there was a scheduled Million Man March in Washington, DC led by Louis Farrakhan. The politics of the march were fairly conservative but attracted between half a million to a million Black protesters. The racism that was crescendoing & becoming voluble became mute in a flash. The exercise of power is a mighty force for social change–& intimidation.

Despite the cold-blooded murder of Michael Brown in August, there is not a shred of evidence protesters have been unruly or riotous in any way. Rather they have stood resolute & steadfast on the Bill of Rights & have not exceeded that despite military assault by state & local riot cops. They have fought for their rights to protest in the courts & in the streets; they have been legally rebuffed but they have not backed down. Have there been some rough scuffles? There always are when riot cops show up with tear gas & assault weapons & attempt to deny the Bill of Rights.

It is not a promising thing when federal officials, the State of Missouri, & local cops go on war footing prior to the verdict because the suggestion is the Black community will erupt in lawlessness if killer cop Darren Wilson is not prosecuted. The Black community is preparing a public response of peaceful protests in that eventuality & when officials set off sirens & red alerts in advance they are attempting to create an atmosphere to justify violent assault against peaceful protesters.

In the end, this verdict is about simple justice for a young kid just starting out in life. By all accounts he was a good kid, despite the odious attempts to impugn him as a doper & a thief. If this verdict tries to let Darren Wilson walk away scot-free there needs to be–& there will be–rallies around the world demanding justice. This verdict is about Michael Brown but an indictment stands against the US war on Black teens where hundreds of unarmed kids are simply shot down in the streets.

Our fullest solidarity with the Black community of Ferguson.

(Photo from Ferguson, photographer not identified)