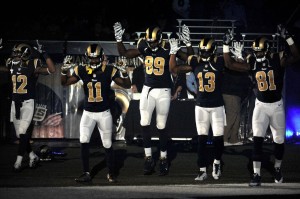 When the St. Louis Rams entered the field for introductions in a game against the Oakland Raiders in the St. Louis stadium, these team members had their hands in the “Hands up, Don’t shoot” position in solidarity with the Black community of Ferguson.

The management of the team who didn’t share this solidarity made a statement that they were not informed the protest would take place & in fact had positioned armed National Guard at the game. Protesters who rallied across the street from the stadium chanting “Hands up, don’t shoot!” ”No Justice, No Football!” ”This is what Democracy looks like,” & “We’re here for Mike Brown” were assaulted & arrested after the game.

The ruling elite has made a massive blunder in letting the killer cop walk free while the entire world watches. It’s a decision that signals open season on Black teens but is also igniting widespread outrage & protest. Black power is shaking free the restraining control of the Democratic Party & charting a course of independent action. Not only is St. Louis prosecutor Robert McCulloch a Democrat but so is the Missouri governor & the president of the US. So much for justice from that party.