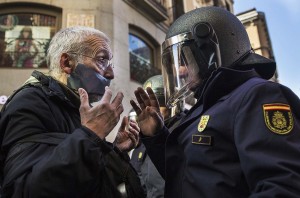 So much for going “gentle into that good night.” If the ruling elites don’t want seniors protesting, they ought to leave their pensions & social security alone in the austerity programs. But today’s seniors aren’t that provincial. They’re from the 1960s-1970s generation that in their millions around this globe were on the march for democracy & against the Vietnam War. Resistance to injustice & tyranny was the gestalt of the times. So they know a thing or two about politics. Some have been active for all those years & in every war & struggle since; some are coming back & taking up their place again.

This fellow at a Madrid protest is one of thousands in several Spanish cities who marched against the proposed Public Security Law moving through the parliament which takes a direct hit on the right to protest. The Spanish oligarchy (including their predatory moochocracy) is tired of protests against the IMF-EU imposed austerity program.

The provisions of the proposed law are so draconian you can’t believe they’re not a Monty Python skit. Many protesters covered their mouths with tape & carried placards calling the measures a “gagging law.” Police at the Madrid protest forced media photographers to produce identity papers. Hefty fines will be levied for burning the national flag, for demonstrating near the parliament or other “key installations”, for circulating photos of cops considered particularly dangerous, or for attempting to stop evictions & home repossessions. Depending on the offense, fines go from 600 euros (US $745) for insulting a riot cop, to 30,000 euros (US $37,000) for burning the flag or protesting home repossessions, all the way up to 600,000 euros (US $745,000) for protesting outside parliament. How is that distinguishable from farce?

Unrestrained police powers are considerably promoted in this piece of rubbish law, including rights to summarily expel African immigrants trying to enter Spanish territory in the North African enclaves of Ceuta & Melilla. Currently immigrants who rush the barb wires fences between Morocco & the enclaves face police brutality but the possibility of remaining in Europe if they succeed. After being assaulted, many limp with injuries into the refugee quarters in the enclaves hoping for a chance to make a better life than neoliberal plunder in Africa provides. Immigration policy doesn’t get more barbaric but this new law is sure going to try.

Our fullest solidarity with the protesters in Spain. May they kick that damn law from here to kingdom come.