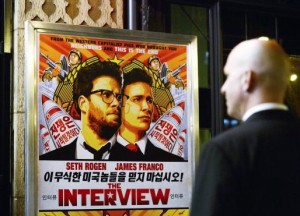 As farces go, they don’t get better than the US accusing North Korea of hacking Sony to prevent the release of the film “The Interview” about two US journalists attempting to assassinate Kim Jong-un. If it turns out to be true, we can send Kim a list of other unworthy films & ask him to have a go at them too. Adam Sandler films would be first on the list.

But that isn’t where the farce begins & ends. Obama had the temerity to go ballistic about the hacking when the whole world knows from the Edward Snowden revelations that agencies of the US government run global surveillance programs with the cooperation of telecommunications companies & European governments. The US government is reading our emails, listening in on our phone calls, & stalking us on social media. And they want us to care about a little hack-job on Sony!?

The FBI issued a statement saying North Korea’s hacking fell “outside the bounds of acceptable state behavior.” How can that be read as anything other than sarcasm? They wouldn’t give any details on how the agency concluded North Korea was behind the Sony attack but we can hazard a guess that their global surveillance system was involved.

The US has imposed crippling sanctions on North Korea for more than 50 years & has been running surveillance on the country all of that time. A little payback is overdue.

(Photo of security guard outside Dec. 11th LA premiere of “The Interview” by Kevork Djansezian/Reuters)